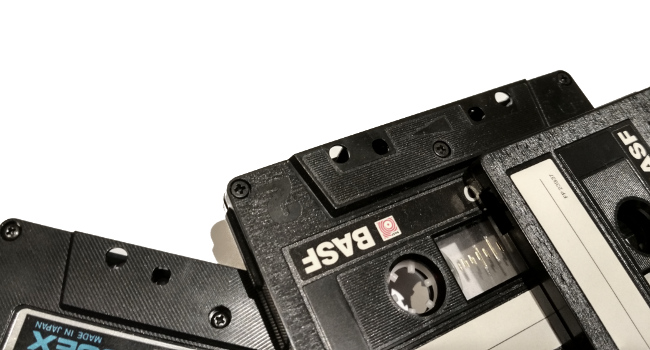 In a previous post I wrote about my assignments for the sound recording module I took as part of my PhD. Here, I will present the projects of the Interactive Digital Multimedia Techniques module.

In the first major project of the module we were required to find some unused object and create an interactive digital "something" out of it. The title for the projects, and the following event in which they were presented, was "CruftFest". My project, the tapeless cassettes, uses modified audio cassettes as controllers for an interactive and collaborative musical interface. It invites users to manually turn the cassettes wheels, with their pinky or a BIC® pen, to control the speed of the music. The interaction is simple and intuitive - the higher the speed of the wheel, the faster the music. I assembled multiple cassettes to enable a group of users to play together, letting each one to control different track in the music. The resulted sounds fluctuate in speed and in pitch, and therefore cannot be synchronized. The lack of synchronization, which is unusual in familiar music, suggest different type of interactions with the musical materials and between players.

More details can be found in the project page on github.

Here are a few pictures of the project from the CruftFest event.

As the final project for the module I created the Schleikess - a controller for full-body interactive performances. It requires force and effort to play with, hopefully facilitating expressiveness. The interface is composed of two elastic bands that are attached to the performers' belt loops on one side, and a main unit that measures the tension on each elastic band. The performer holds the other side of each elastic band and stretches them to play. In the current work, a generative drum machine is used to demonstrate the capabilities of this controller by mapping the tension on the bands to tempo the pitch properties of the drums.

Again, all of the bits and bytes can be found online.

And a few more pictures from the presentation event.