Deployment sucks! I'm not a dev ops / sys admin type of person, and every time I'm into deploying a web project I start to rethink the whole process and get confused. Recently, I decided to restart the work on one of my older django projects, Xteams, and one of the first tasks was to migrate it from heroku to my VPS - a digital ocean droplet. Don't get me wrong, heroku is great, but I'm already paying 5 bucks per month to digital ocean, where I host all of my web projects, and the single web dyno that heroku gives for free is a real limitation. Before starting to migrate the project, I decided about the following deployment requirements:

I liked heroku. Deploying is really easy, and if I can accomplish a task using git alone I will probably do it that way :-) So I checked dokku. It clearly solves the first requirement easily: apart from dokku itself there is no system wide configuration and dependencies to worry about. It also solves issues 5 and 6 really nicely: the deployment is done by pushing to remote repository and production specific configurations (or secrets) can be added with environment variables, which I like. On the other hand, I'm not sure if dokku would play nicely with my other projects, there is no way to run an environment similar to production locally, and I can't reuse components for development.

Almost a year ago I read Harry Percival's great book "TDD with Python". He teaches how to automate deployment with ansible. I managed to deploy the sample app for the book and later I used the same technique to deploy one more django app of mine. However, I really don't like this approach. It seems very fragile, touching too many configurations too often, making me afraid about my other projects on the server. It's a lot of work too, and work that I can't reuse for development. Overall, I feel that it only answer requirement 3 and 6. The rest are not even close to be answered.

Finally: docker and docker-compose to the rescue 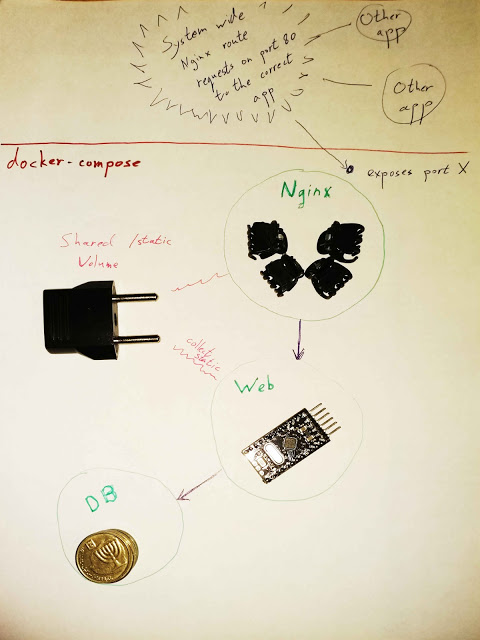 You weren't expected this, didn't you?!? Let's follow the diagram and I will try to convince you why using docker-compose in production (and also partly in development) is a good idea. With docker, you can create an image of an application, together with all of its dependencies, and run it in an isolated environment, which is called a docker container. docker-compose lets you take a set of such images, define the links between containers (in means of network and volume access) and orchestrate all of the containers together, from building to running. In the current example I had a DB container with an official postgres image. Every time I need to configure postgres on my local machine I find myself reading throughout half of stackoverflow and the official docs for information. This time it was really easy: I grabbed the official postgres image from docker hub and that's it - no more configuration needed. Second, there is the web container that runs the django app itself. This is the main container in my project. I wrote a Dockerfile to describe how the image should be built. It contains only a few lines: starting from the official python 3.5 image, pip installing dependencies, and collect static files. Secrets are written in a special file which django-compose pass to the container as environment variables. This file is not source controlled: I created one manually on my local machine and another one, slightly different, on my server. Here's the Dockerfile for this image:

Outside of the docker orchestration there is one more Nginx instance, its job is to route each incoming request to the correct app on the server. Every app is listening on a different port and Nginx only route traffic based on the hostname in the http header. Here's the configuration file:

Building and running these containers is really simple:

So now, let's try to tackle the requirements list again:

I really like docker-compose. At first, it looks like a tool with a steep learning curve. But don't be too intimidated. Give it a try and you might find an elegant solution for deployments, which will hopefully scale well with your requirements. I'm sure that there are lots of approaches I'm not covering here, and all of the above only reflects my limited experience in the field. Therefor, feel free to criticize and share your experience about the subject!